PlasmoGEM – The Plasmodium Genetic Modification platform. The genomes of malaria parasites are difficult to study because the DNA of the major species has an unusual base composition and is therefore hard to modify experimentally. We initiated the PlasmoGEM project to overcome these problems (Pfander et al., 2011). The project has created a library of gene targeting vectors to disrupt most P. berghei genes very effectively (Gomes et al., 2015). Each vector has a unique molecular barcode that allows us to analyse mixtures of mutants simultaneously. We will continue to grow the P. berghei resource at the Sanger Institute, where we have now also pointed the platform at Plasmodium species infecting humans. 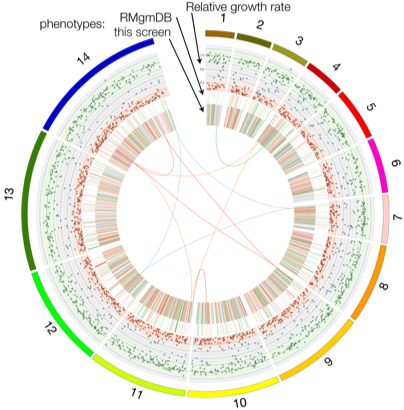 Genetic screens in a divergent eukaryote. The barcoded PlasmoGEM vectors are now at the heart of our ability to carry out global genetic screens in P. berghei. This is the first time this can be done in a malaria parasite, and we expect the approach to reveal deep insights into its unique and important biology. In our first screen we looked at blood stage growth rate and discovered the P. berghei genome to have the highest proportion of essential genes of any organisms studied (Bushell et al., 2017). We think this is because the parasite’s ancestors simplified their genome when they started to inhabit red blood cells. Our discovery is great news, because it means there are many more essential targets to explore for drug development. But which should we target? We are working with the systems biology initiative MalarX to find out, in particular with the Hatzimanikatis lab on metabolic modelling, with the Heussler lab on liver stages, and with the Soldati lab on specific pathways.

The evolution of sexual reproduction. Malaria parasites must reproduce sexually to infect mosquitoes. Studying the underlying molecular processes is important to find ways of blocking disease transmission. Due to its position in the tree of life, we have also been able to use P. berghei to reveal some of most conserved molecular mechanism involved in fertilisation (Liu et al., 2008; Ning et al., 2013). Genetic screens will now reveal components of the axoneme in the male gamete, help us understand better how gametes fuse and identify the conserved core machinery involved in meiosis.

Mechanisms of lineage differentiation in a parasite. Surprisingly little is known about the molecular mechanisms that control the complex Plasmodium life cycle. Transcriptional regulation is important, and we are therefore interested in a small family of plant-like transcription factors in P. berghei (see for instance Modrzynska et al., 2017). In close collaboration with the Waters lab, we recently identified one of them, called AP2-G, as master regulator of commitment to sexual reproduction (Sinha et al., 2014). A genetic screen is now leading us to other nucleic acid binding proteins that interact to bring about the male and female transmission forms. Through genetics screens we can, for the first time, hope to gain a nearly comprehensive understanding of the genes that contribute to parasite development and transmission. A preprint describing the discovery and detailed characterisation of new sexual development genes is now on bioRxiv: (Russell et al., 2021)

Single cell biology of malaria. With the advent of single cell transcriptomics, it has become possible to identify cell states and cell types that were previously unrecognised because they could not be isolated or were of very low abundance. We find that single cell transcriptomics opens up new avenues to study parasite differentiation (Reid et al., 2018), immune responses (Lönnberg et al., 2017) and mosquito tissues. We now want to develop single cell approaches that can overcome the next roadblock for scaling up P. berghei genetics, by allowing mutants to be characterised both, in large numbers and at great depth.